Go Medieval With The Family at Medieval Times! #Giveaway

The main attraction for our family road trip to Schaumburg, IL last week was Medieval Times. It's not the first time we've been there, but it was the first time in a while. And personally, I find the show never gets old; I saw it three times last year, and thoroughly enjoyed each one! And of course you get a wonderful dinner as well, which makes it even better! I think Medieval Times is a great family attraction, and I'm sure anyone who has ever been to a castle will agree. 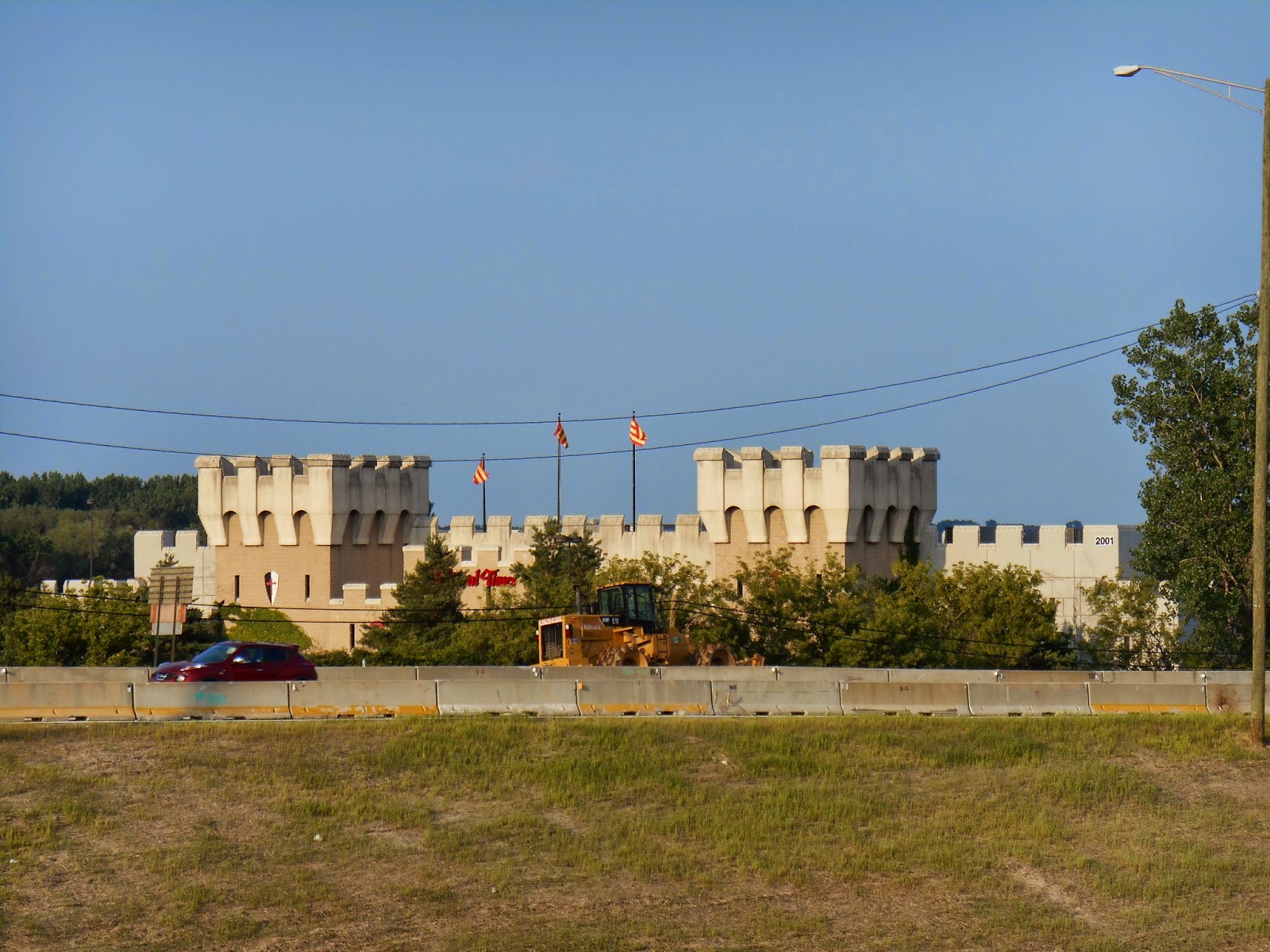 We arrived about an hour before showtime, which gives plenty of time to check-in, and then wander the gift stands in the main hall. We purchased a few souvenirs, and enjoyed watching the knighting ceremony for a couple children. Then the chancellor appeared, and began the seating. 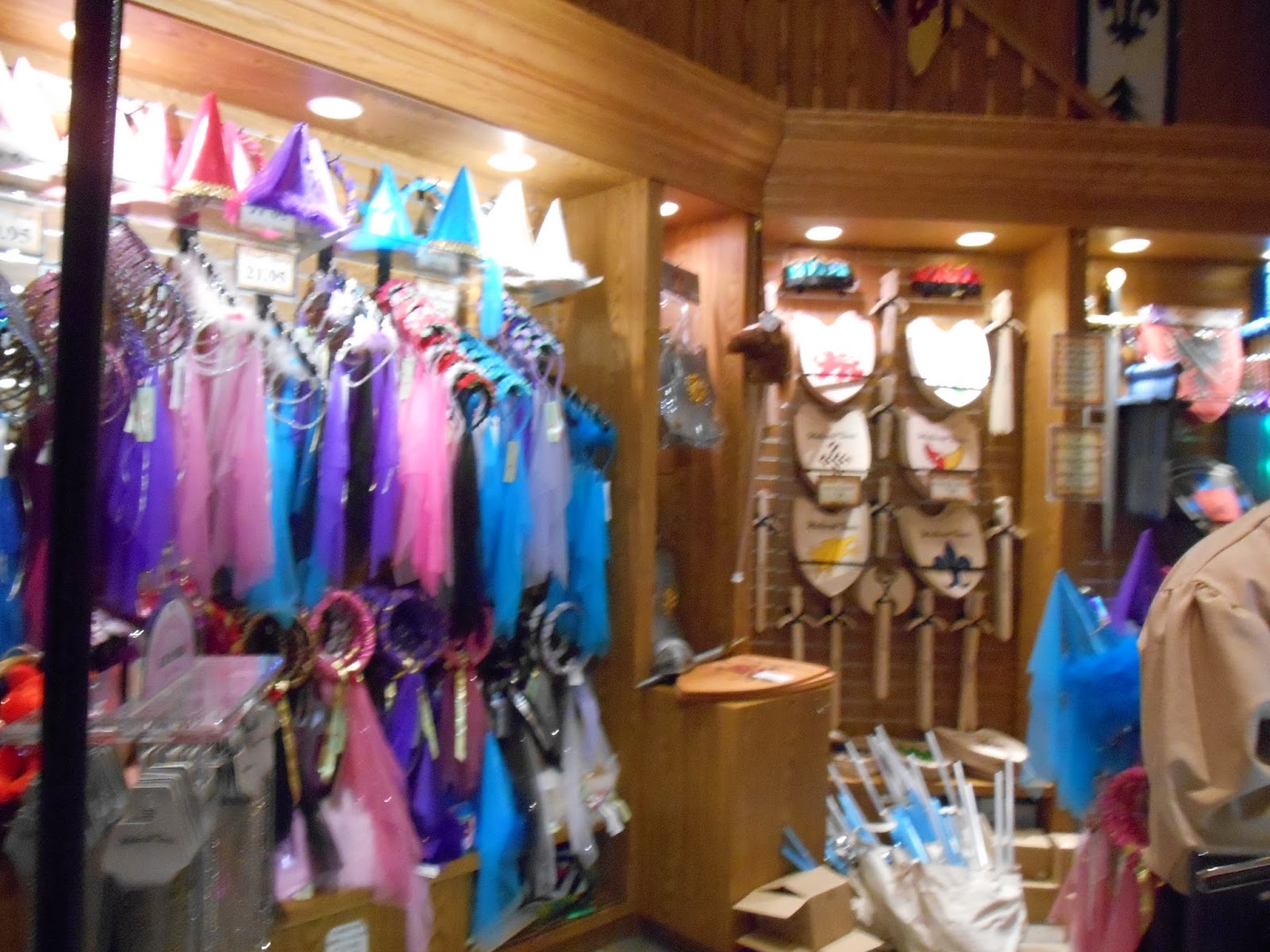 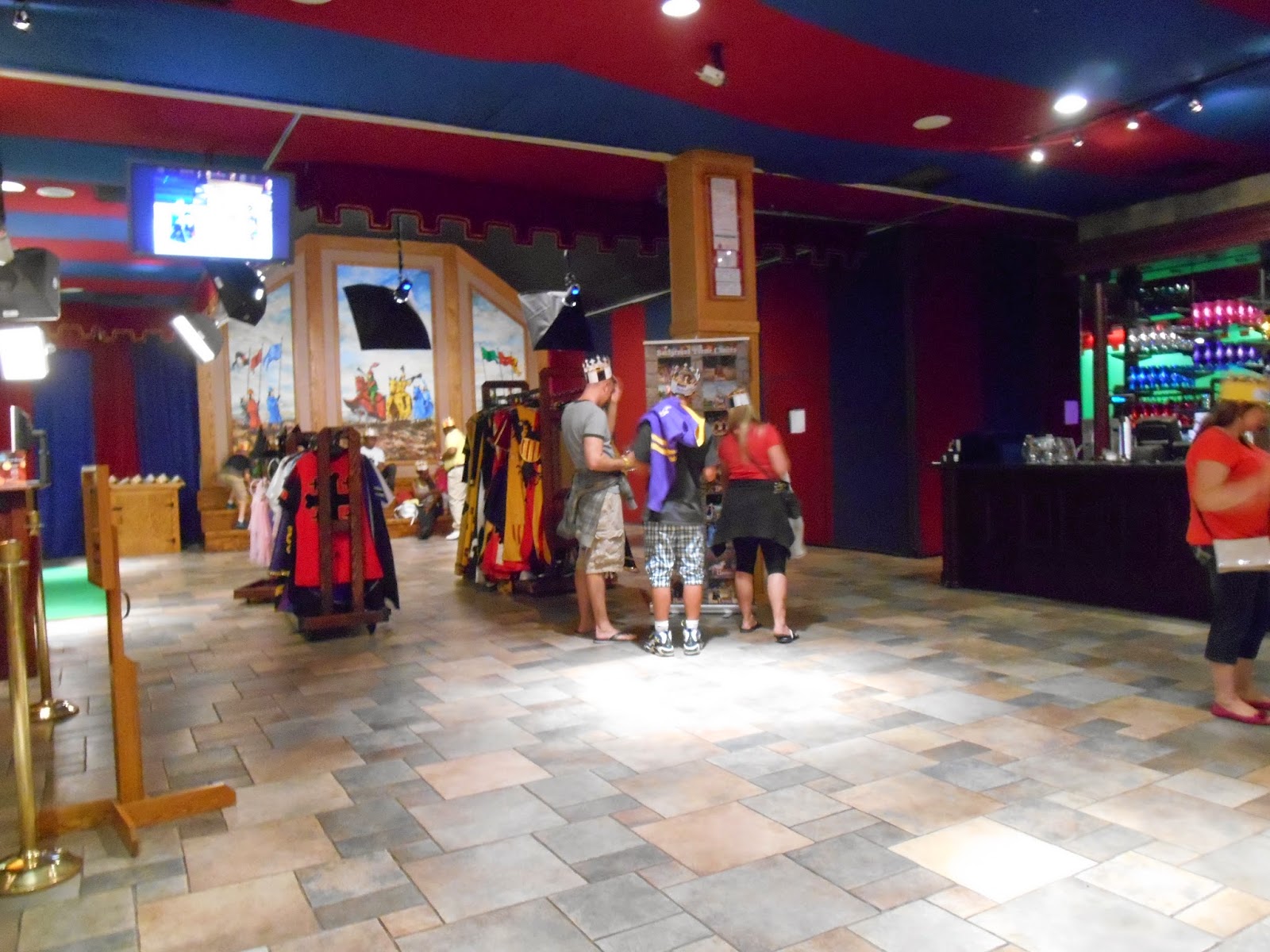 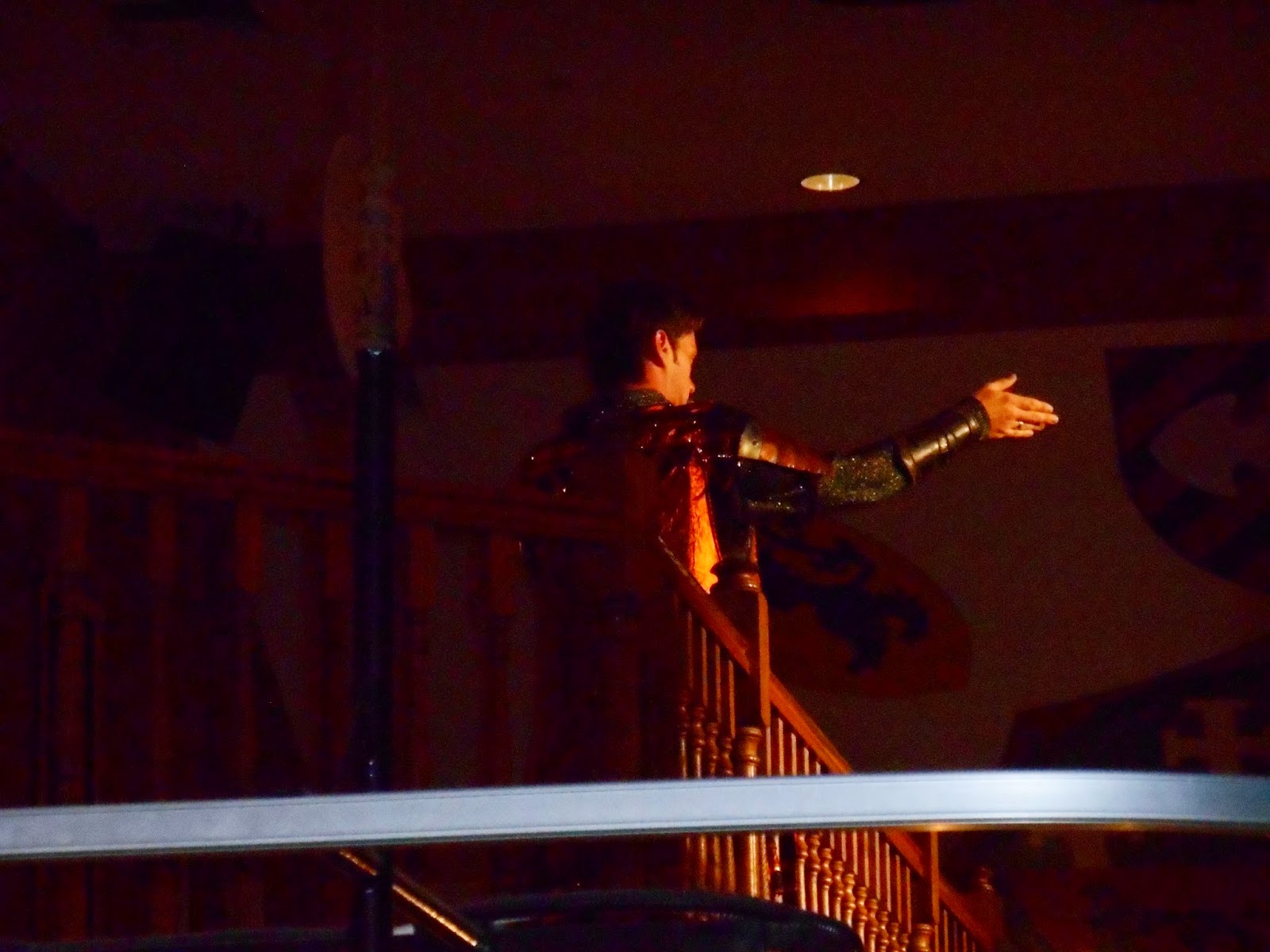 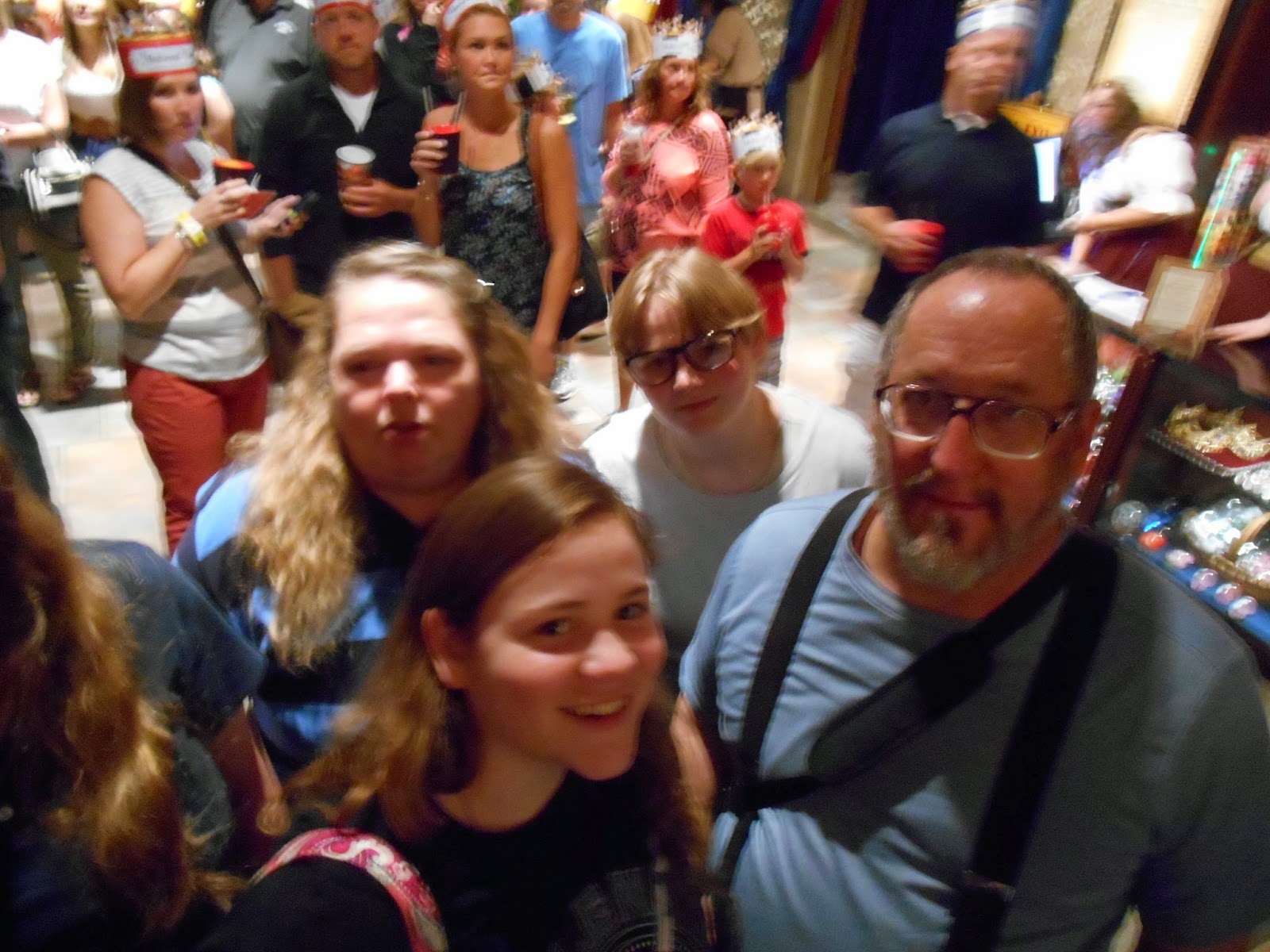 We were in the green section, which meant we were the first people to be seated. We had the royalty upgrade, that allowed us to be seated in the front row, and each member of our party received a souvenir flag. Our serf, Kenny, arrived very soon after, and took our beverage orders-the meal comes with your choice of Pepsi, tea, Sierra Mist, or Diet Pepsi. This serf got in to his role much more than some of the other servers I have seen, which made it fun. 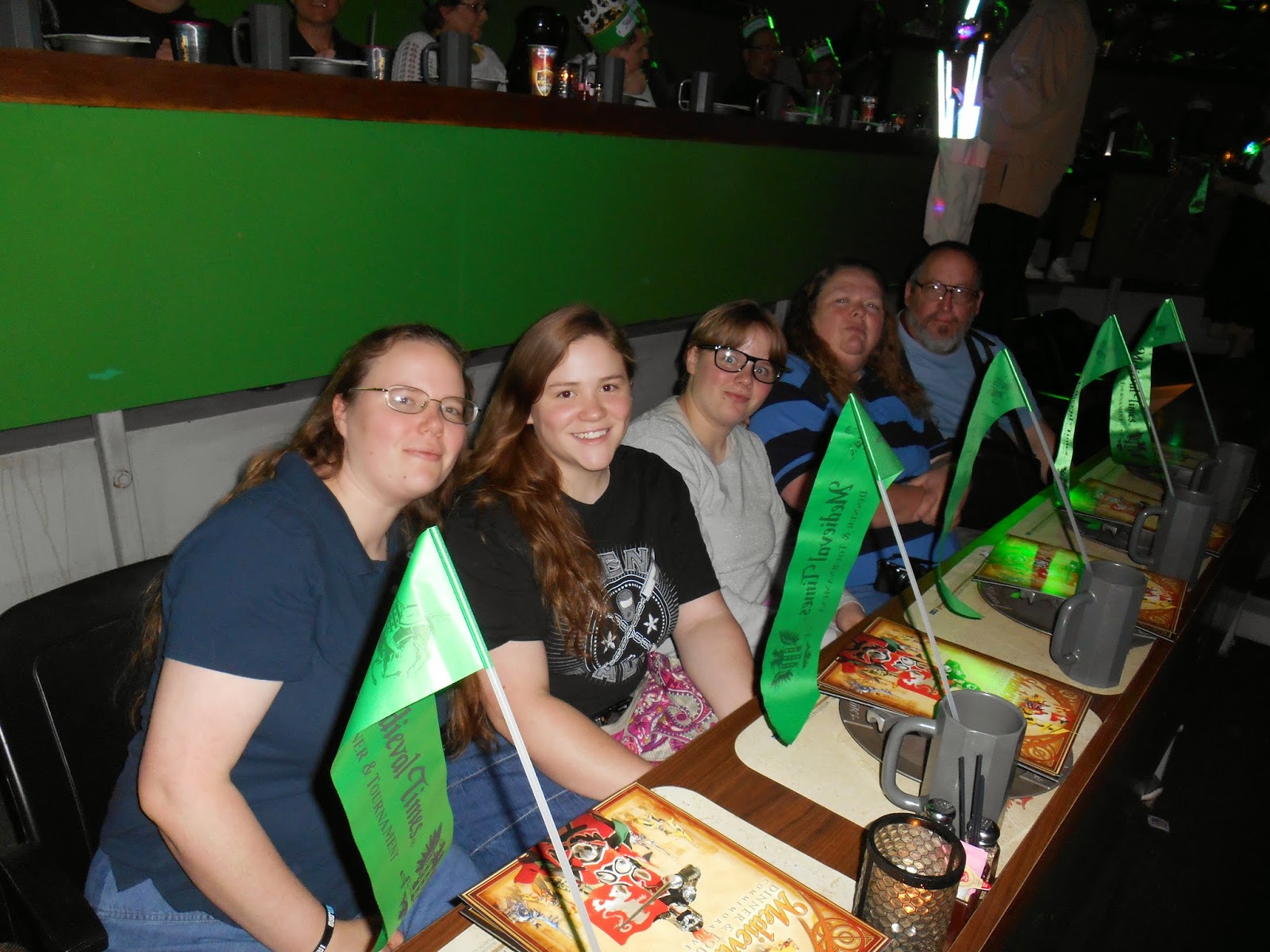 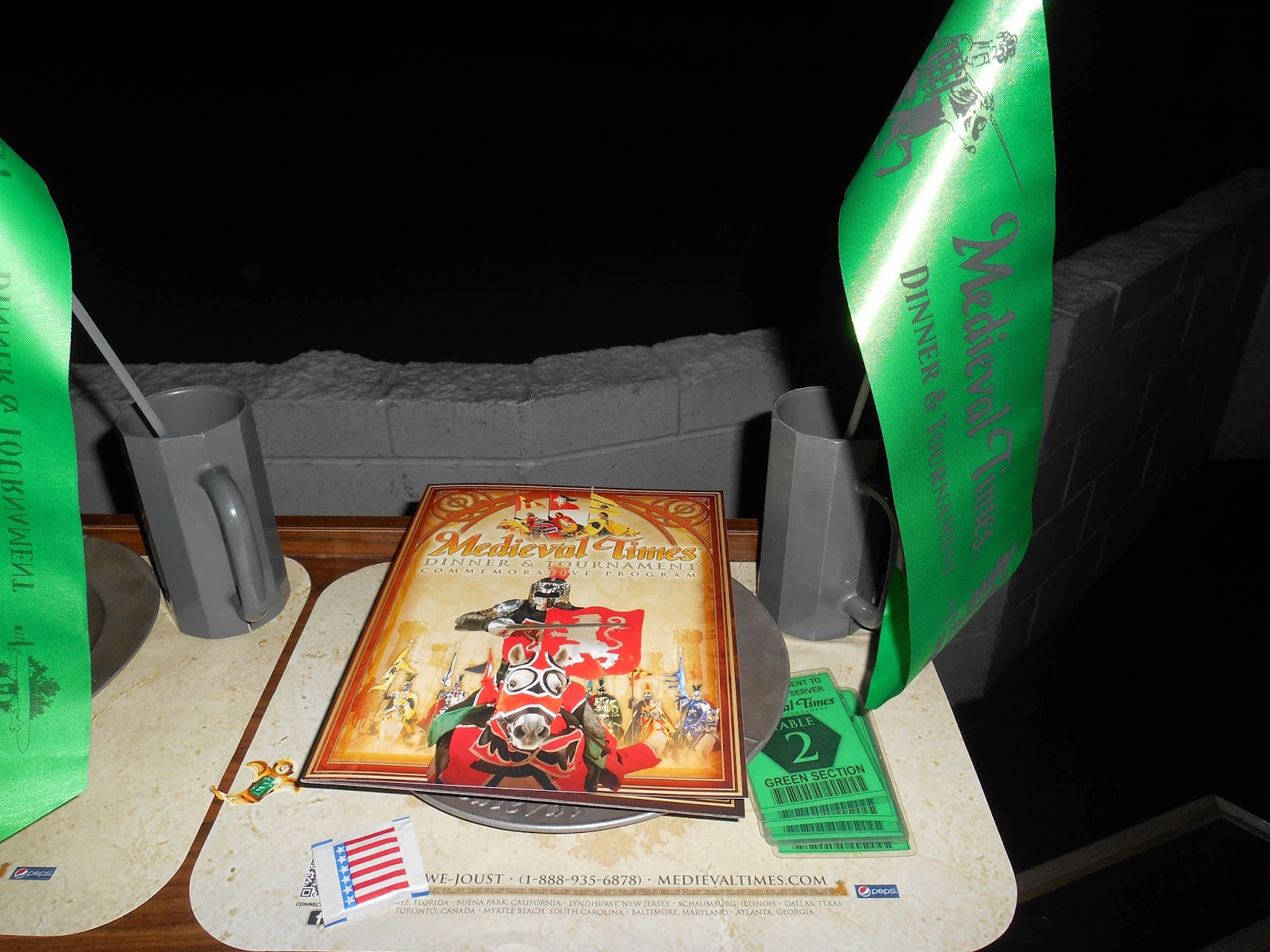 At 7:30 the show started, with everyone enjoying their "blood soup" (tastes like tomato soup) and garlic toast. Throughout the show, we were also served "baby dragon" (chicken), "dragon ribs" (bbq ribs), roasted potatoes, and of course the apple turnover for dessert-my favorite part of the meal! I've always enjoyed the feast at Medieval Times, but the chicken this time seemed extremely good. It was so moist and tender, and very flavorful! 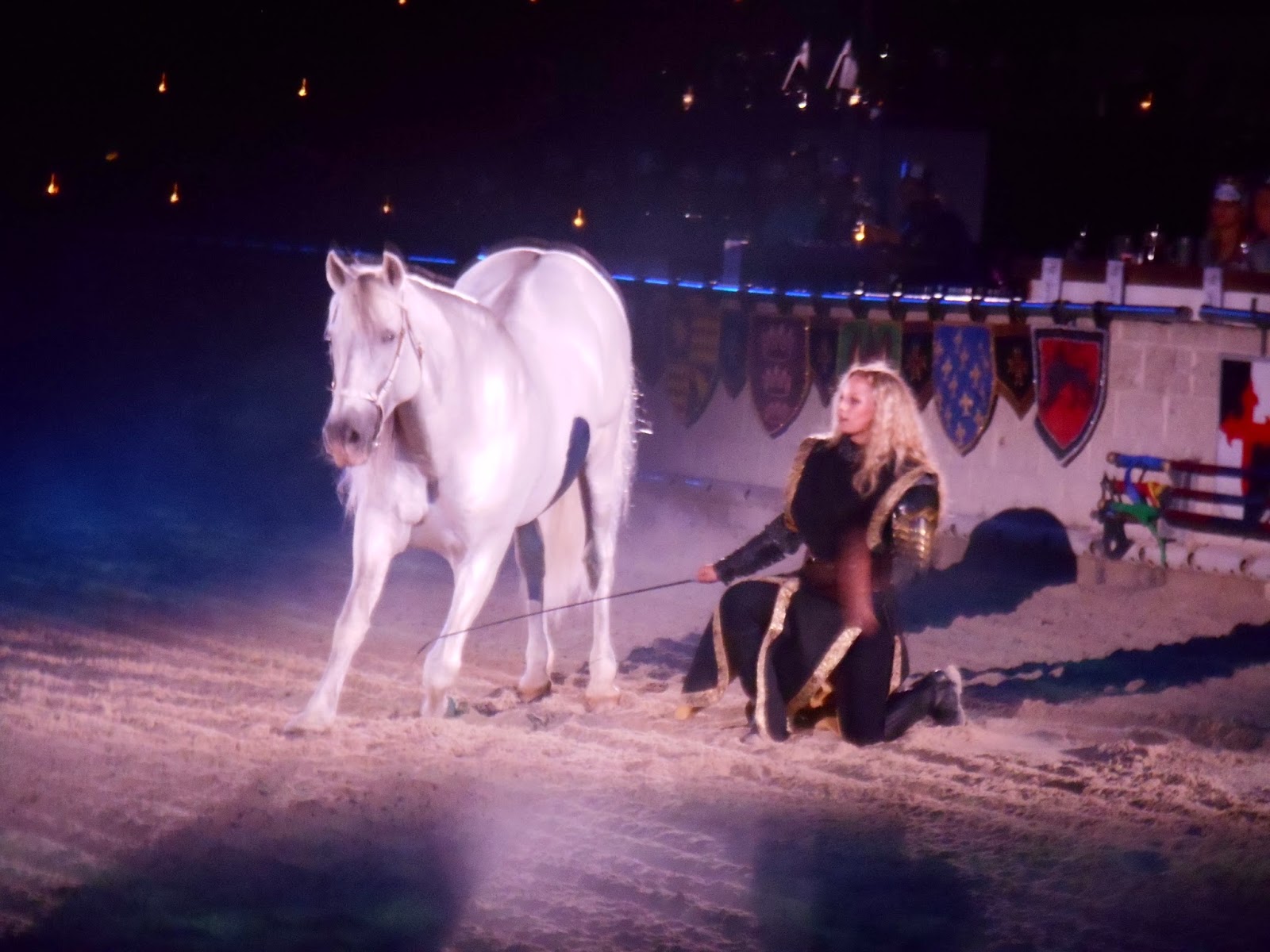 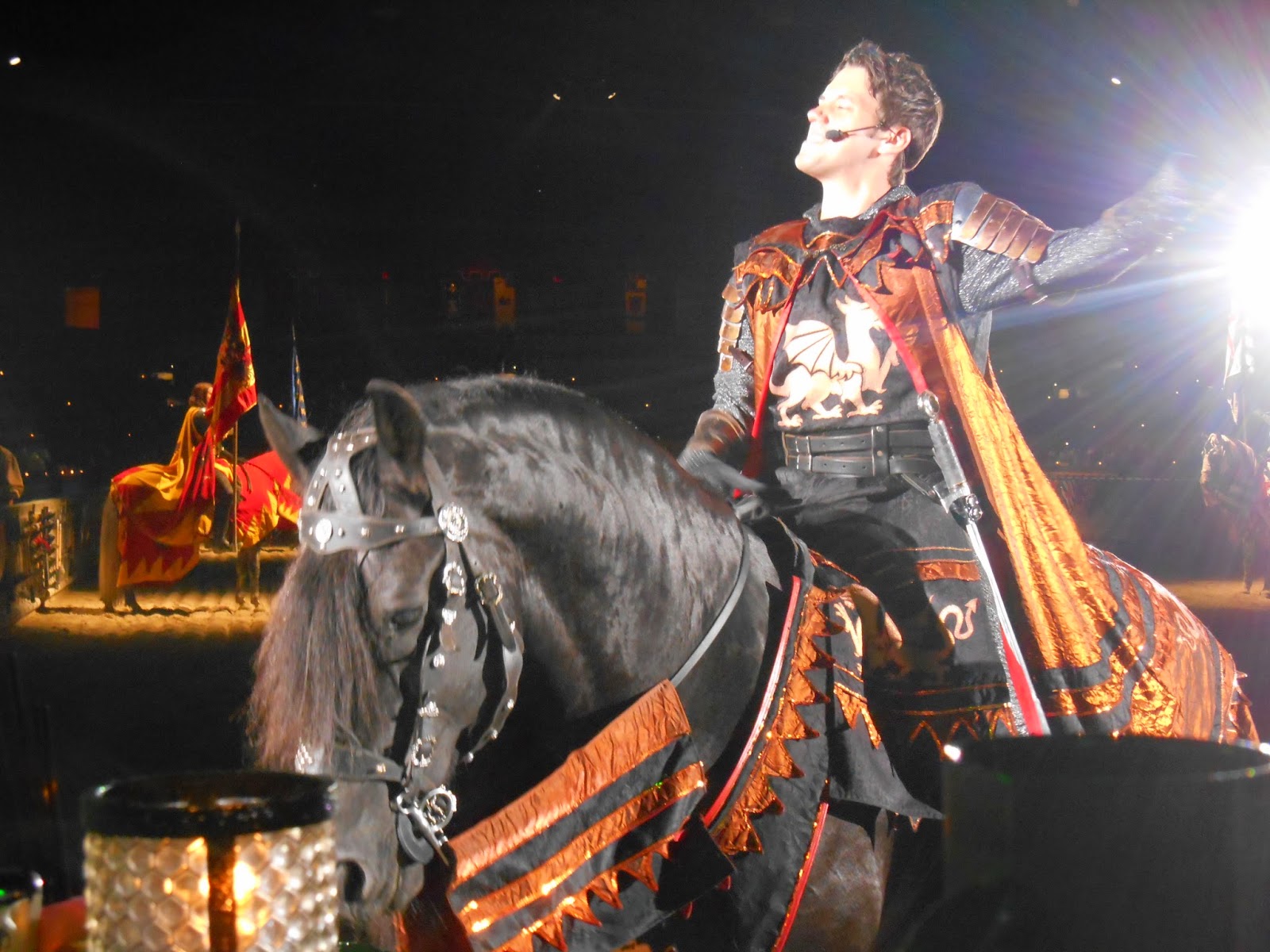 As we enjoyed our meal, we also enjoyed the story unfolding in front of us. The 6 knights took turns in the tournament, and each time they completed one of the sports, the princess would give them carnations to throw to ladies in the audience. M and C were both thrilled to received a carnation from our green knight!
As the tournament drew to a close (with our green knight the victor!) it became necessary for our knight to do battle with a messenger from a distant country, as well as his 2 assistants. Of course the good (green) knight won, and vanquished the enemy to the dungeon! At the end of the battle, all the participants of the show came out for a final farewell. 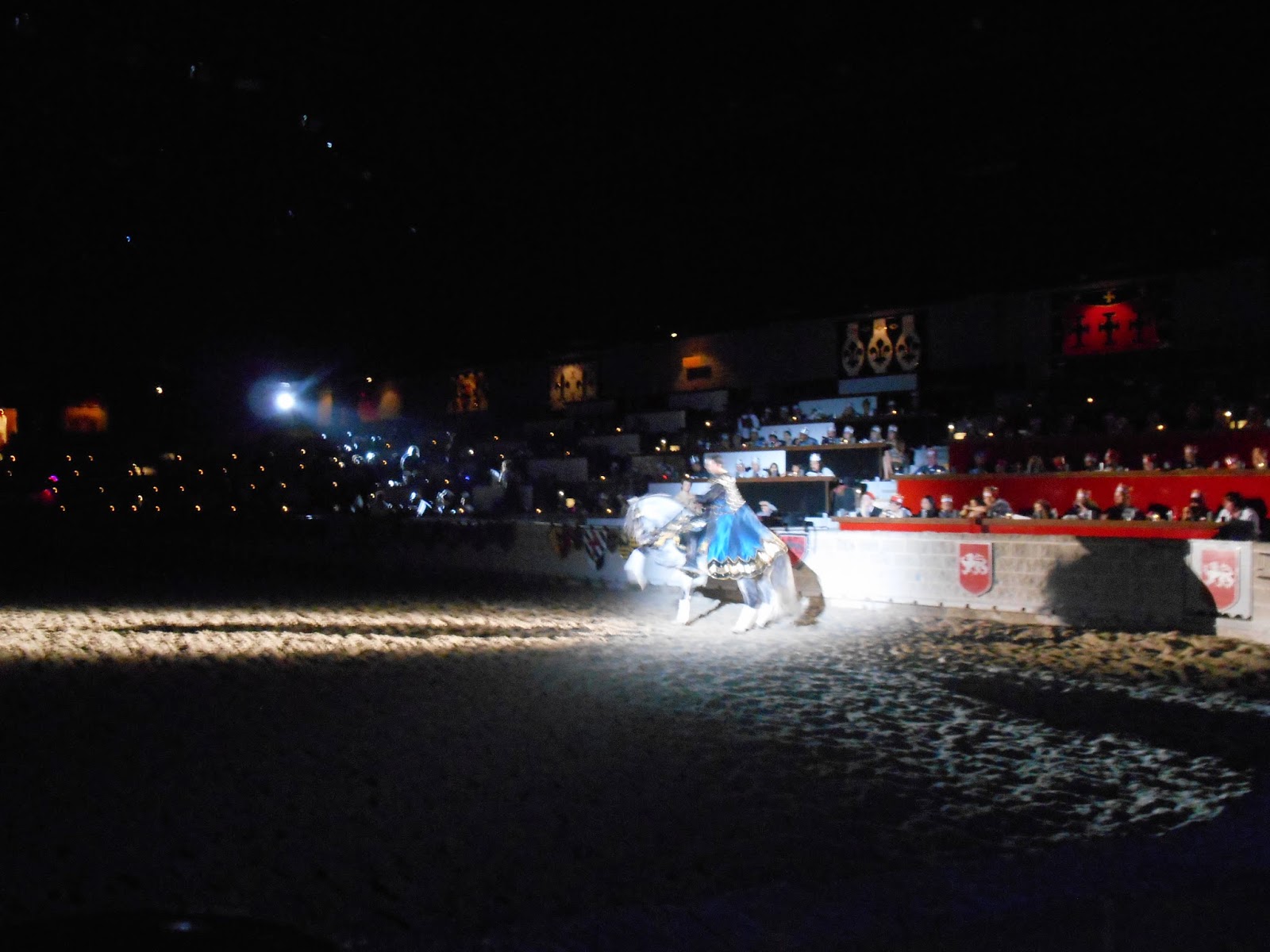 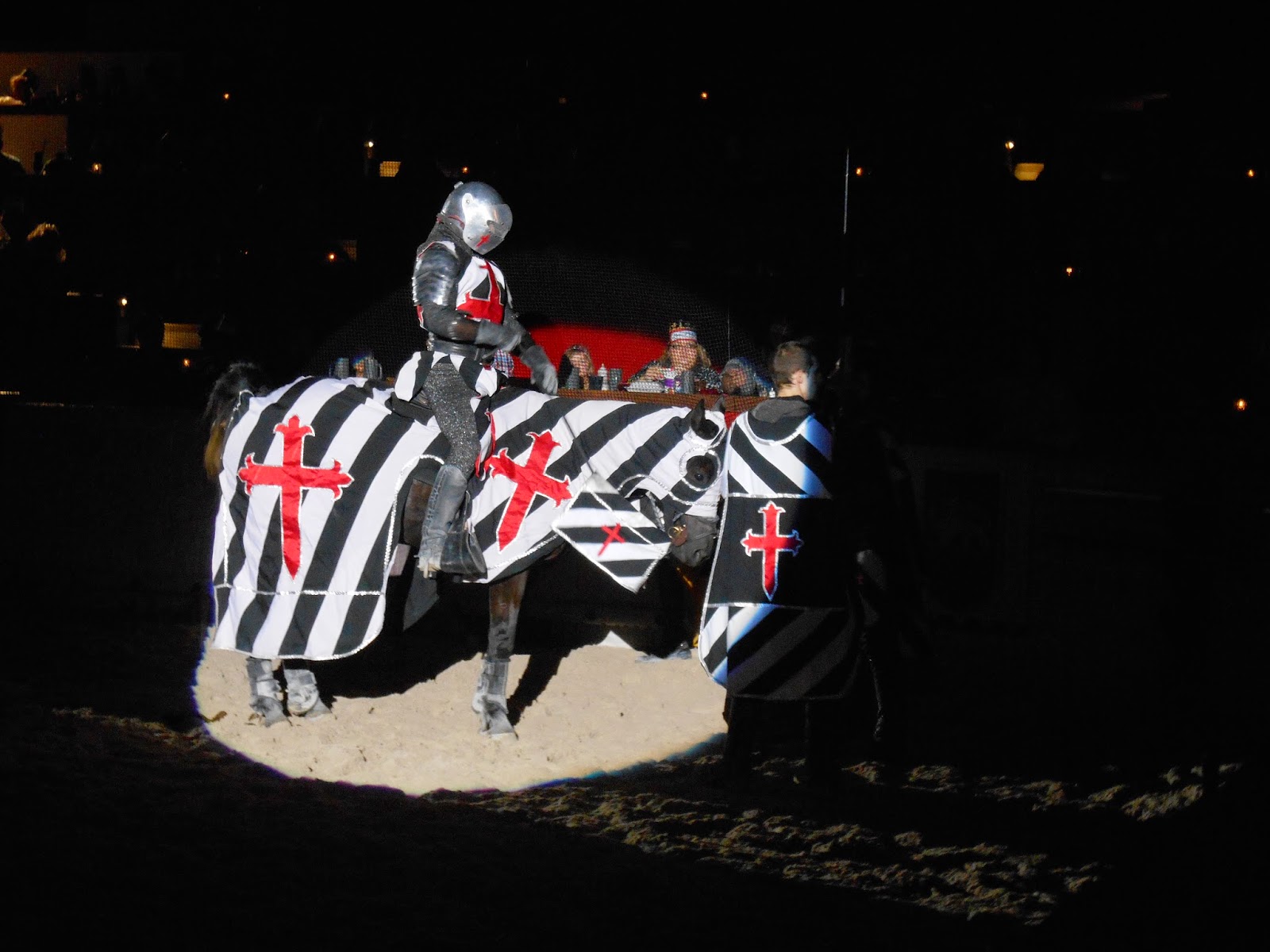 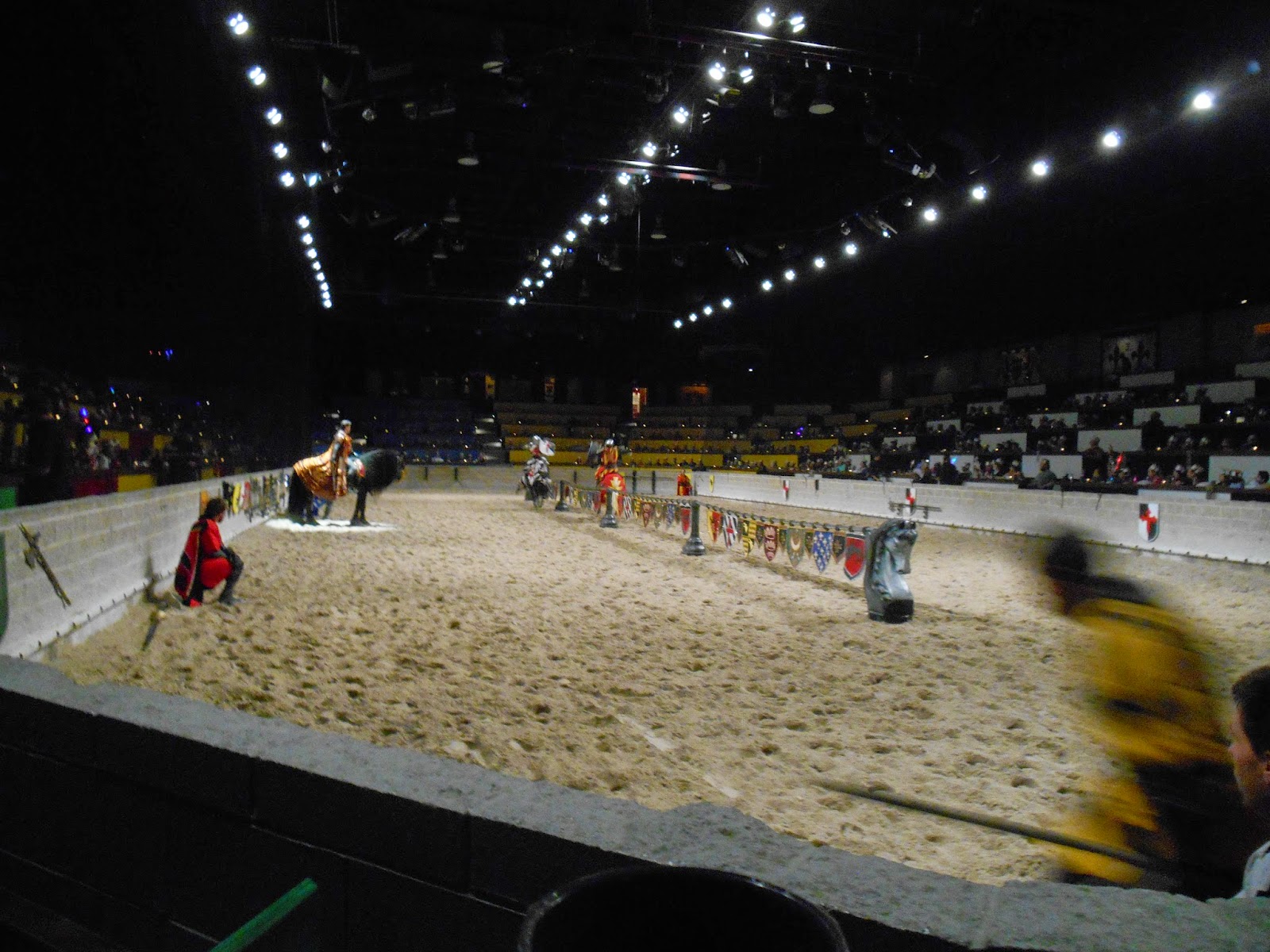 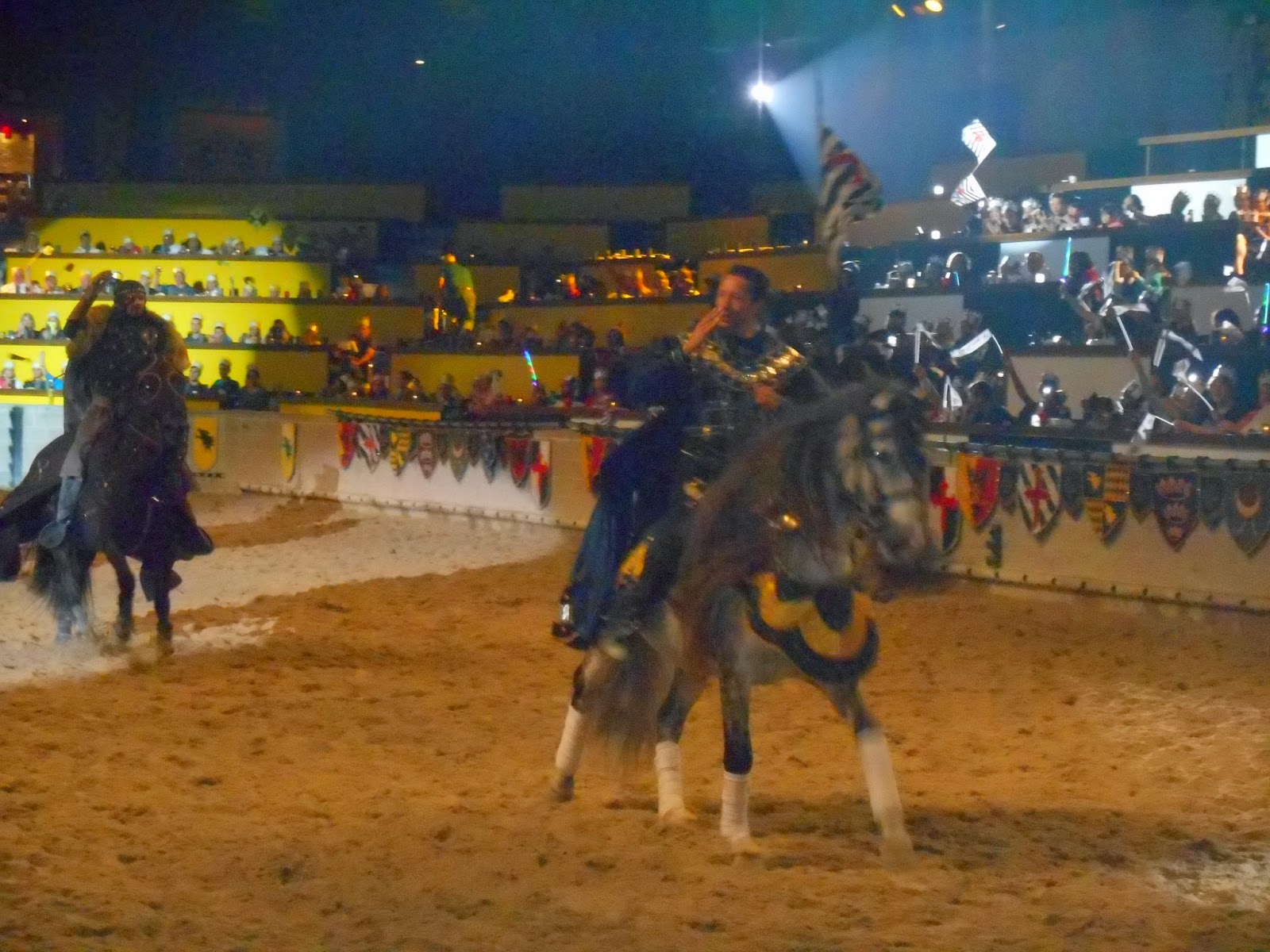 As always, the entire family loved the show and dinner at Medieval Times. It's one of our favorite places to visit when we're in the Chicago area, and it never gets old or boring. If you're ever near any of the Medieval Times castles, I recommend you visit-you won't be disappointed!!

One of my readers will receive two tickets to the Medieval Times Castle in Schaumburg (Chicago)!!
a Rafflecopter giveaway
Posted by Hope at 9:44 PM