A few times a year, there's an excitement building among the girls/ladies in our family. It starts a few weeks before the release date of the newest Nancy Drew PC game, and by the time we actually have it in hand and installed, we're all super ready! It started as a tradition back when the first or second game came out, and has continued to be one of our favorite "girl time" activities. So when I was given the opportunity to download and play the newest game, The Ghost of Thornton Hall, we wasted no time diving in to the mystery.

"Jessalyn Thornton's fateful sleepover at the abandoned Thornton estate was supposed to be a pre-wedding celebration, but the fun ended when she disappeared. While her family searches for clues, others refuse to speak about the estate's dark past. Did something supernatural happen to Jessalyn, or is someone in Thornton Hall holding something besides family secrets?"

Obviously we don't believe in ghosts, but as expected, the "ghost" in this mystery has a logical explanation. However, this is probably one of the scariest Nancy Drew games in a while, and is my favorite out of at least the past 4 or 5 games. This case actually turns into 2 mysteries; finding Jessalyn, the missing girl, and solving the decades-old mystery of the Thornton family secret. Along the way you will solve puzzles, open a crypt, walk through the family graveyard, stumble upon an unexpected guest, and even open secret passageways that date back to the Civil War!

We started playing the day the game was released, and in less than a week we had it solved. Because we are traveling we weren't able to do it as a girls activity, because they didn't all come with me. M did though, and her favorite part of the day was getting to the hotel in the evenings and playing Nancy Drew! I won't spoil the game for you, but I will say the ending was a surprise, and the teaser for the next game really leaves you on the edge of your seat! 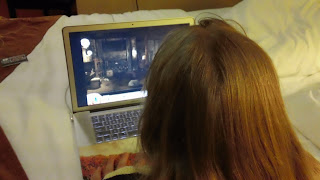 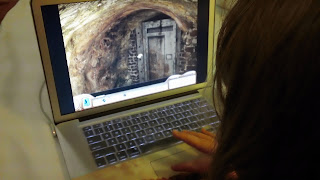 The Ghost Of Thornton Hall also has some updated features, such as being able to fast forward through conversations. This doesn't seem that important until yo'u've played a game a few times through, and can quote the conversations with the characters...then it gets annoying to have to sit through the entire dialogue! This is definitely a bonus!

We're giving away 3 copies of Nancy Drew & The Ghost of Thornton Hall!!
a Rafflecopter giveaway
Posted by Hope at 9:34 PM