Guess what? Our family was able to visit Medieval Times this past weekend, and we had a blast! The Medieval Times Castle located in Schaumburg, IL (near Chicago) is just about 4 1/2 hours from home, so it makes a great little weekend trip for us. We were given 4 tickets with Royalty Upgrade, so I brought along C, and both boys.

Upon arrival we were given our VIP passes, which we then turned in for our seating cards. We were in the Black-and-White section, with front row seating. On our way into the main hall, we stopped for a picture with the King. These can be purchased later while waiting for the show to begin. We wandered over to visit the horses (I've been here at least 6 times, and I still love seeing these big beauties!). The black horse is my favorite, but they are all so gorgeous. I also enjoy hearing the guard of the torture chamber (located near the horses) interact with guests; he does such a great job at his character! 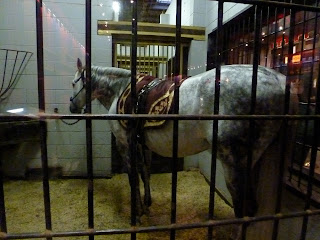 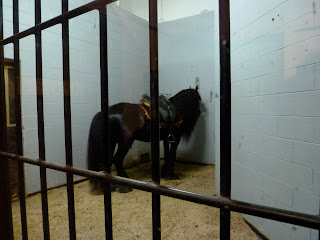 We headed back up to the main hall to watch the knighting ceremonies; even though none of our group was participating, we like watching this part. Soon after the ceremony was concluded, the Lord Chancellor appeared to direct everyone in to their proper seating areas. Not long after getting settled in our seats, the lights dimmed and the show began! 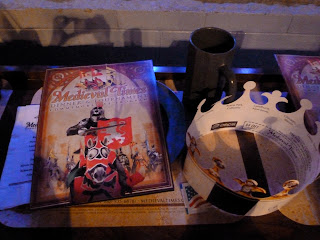 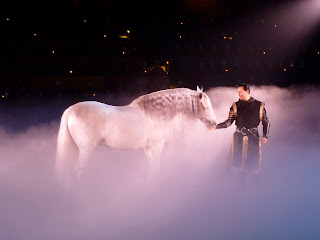 Because I have posted detailed reviews of the show on here before, this time I'm going to mainly share pictures and some video clips so you can get a real feel for Medieval Times. This is by far my favorite dinner show I have ever been to, and I happen to think the Schaumburg Castle is the best as well-and yes, I have been to other Medieval Times castles. Here's a sampling of the show, so if you have never visited-you just might want to, after seeing these videos!


One part I really like is seeing how the knights interact with the crowd. Especially when they give out the flowers; our Black-and-White Knight kept promising a little girl near us that he would bring her something special. She was totally thrilled when he gave her the sash! After the flowers were all given out, and the knights were lining up to begin the jousting, our knight pulled a white flower out of his belt, and gave it to another little girl who was sad because she hadn't been given one! It was so sweet to see, and made that little girl very happy!

I have seen the new show at least 3 times now, but this was J and E's first time at the new one. About halfway through the tournament, J leaned over and said "I like this show a lot better than the old one". He said it was more exciting, and I have to agree-I love the new show!

After the show is over, you can meet the knights, King and Princess, and the Master Horse-Trainer (sorry, I'm not sure exactly what he's called, but he is super talented), get their autograph, or even pose for a picture. I don't remember them doing this on my previous visits, although maybe I just left before they came out. As we exited the castle, everyone agreed that it was indeed a "knight" to remember!

One of my readers will receive 4 Tickets to Medieval Times Schaumburg!!


a Rafflecopter giveaway
Posted by Hope at 11:01 AM