Have you ever been to Medieval Times? No? Then you are seriously missing out! Recently I was given the opportunity to attend a show at the Medieval Times Castle located in Schaumburg, IL (the Chicagoland area). This location is not only home to a new show, but is also running a special event for children on weekends now through September 30.
If you attend a matinee showing on Saturday or Sunday, you will be able to watch (or have your daughter/son participate in) Princess or Knight Training! (Princess training occurs on Saturdays; Knight training takes place on Sundays). This includes a hands-on training session for the youngsters. Princesses-in-training will receive a personal lesson from Princess Catalina on important traits for a princess, while the girls each create their own princess hat. The girls will also learn how to properly execute a princess curtsy. For the boys, the session is led by the Knights, Lord Chancellor, and King Don Carlos. The boys will discover the bravery and courage required to be a knight, as well as receive hands-on instruction about the most important sword-fighting moves.

The date worked out for us to visit on a Sunday, so Knight Training was in progress! The show started at 4:00, and we arrived right at 3:00. From the ticket desk, we proceeded to the photo booth, where all 4 of us posed for a group picture. This is taken against a green backdrop, and your picture can then be pasted onto various backgrounds; we chose the Castle setting for ours. 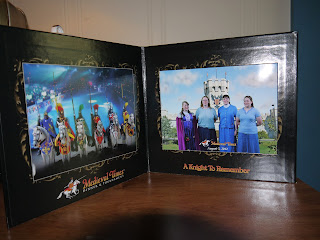 From the photo area, we decided to visit the horses...I stopped to chat with the Operation Manager, George, who offered to buy drinks for our group. M and M decided on the Blue Raspberry Slushie, and C and I opted for the lemonade (which was very good by the way). The drinks are served in souvenir cups, and the girls were thrilled with their knights-helmet cups! 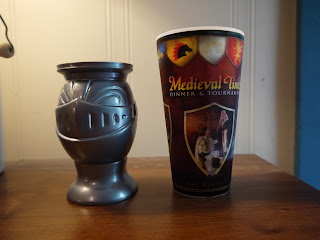 While sipping on the refreshments, we watched the Knighting Ceremony-the conclusion of the Knight Training. Each child who participated in the Knight training was "knighted" by the King, and posed for a shot. The smiles on these children's faces were adorable!

In just a short time, we were all called into the main room to receive directions and seating order. Our group was in the Red and Yellow section, which is in the middle. I was surprised (and very happy) to see that we had front row seats! The table was set with our dishes, and a couple goodies that come with the King's Royalty seating-a Commemorative Program, Cheering Banner, and Souvenir Cup. 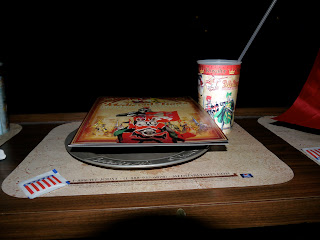 Our "wench" (a medieval term for a waitress :) came and took our drink orders as we anxiously awaited the start of the show. Soon darkness descended, and a mysterious voice narrated a short history of the Knight and his horse.

The King and Lord Chancellor (who is also the announcer) rode out, followed by an entourage, including the 6 knights. After welcoming his guests, the King ascends the throne, and is joined by his daughter the Princess. 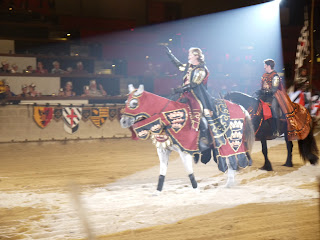 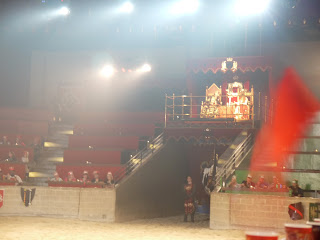 Here the focus was moved to the arena again, as the "dancing horses" took center stage. Watching these horses is amazing, and I imagine never gets tiring, no matter how often you see it! 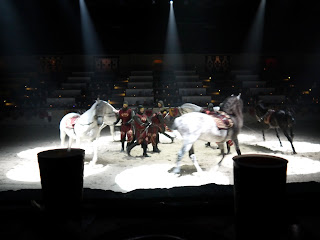 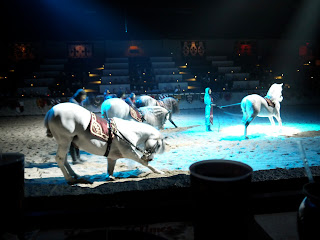 The Lord Chancellor appeared and started some friendly competitions between the knights-catching a ring on their lance, throwing a spear from horseback, and even a relay race! 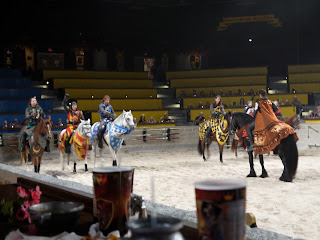 For each time a knight successfully completed a task, they were given flowers to toss to a guest of their choosing. M, the youngest in our group, was so excited when our knight gave her a flower! (She carefully cared for it on our trip home, and it now rests in a vase on the dining room table).


While the knights were competing, our dinner was served. This is a full 4-course meal that starts with a bowl of tomato bisque, and a piece of delicious seasoned focaccia bread. Once this is completed, the wench brings out an oven-roasted chicken-again, with a delicious seasoning, and an herb-basted potato. A BBQ rib also finds it's way to your plate (this is probably my favorite part of the meal). Towards the end of the show, the dishes are removed (you are allowed to take home any leftovers though), and a warm apple strudel is served. Absolutely delicious! If you walk away from Medieval Times hungry-it is completely your own fault, because the food is tasty and plentiful! I literally brought home almost a whole piece of chicken, a slice of potato, and some BBQ rib. 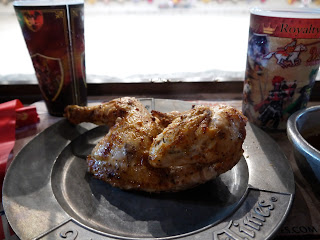 One of my favorite parts of the show is when a single white stallion and rider come out, and literally "dance" to music playing in the background. This is magnificent, and if you've never seen it-this few minutes alone is worth the price of your ticket!

Now, back to the tournament...at some point during the competition, the Chancellor informs the King that a herald is advancing towards the castle. Although it is not know whether he is friend or foe, the King allows this messenger to deliver his news. Alas, it is not good news for the King! He is told that a distant King wants to wed the Princess, and join their kingdoms. If the good King refuses, he is promised destruction and misery-not only for the King's household, but for all his loyal subjects as well. 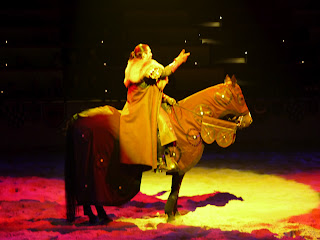 As the messenger is escorted off the castle property, the tournament continues, soon moving into jousting. Once a knight has fallen from his horse, the fight continues on foot, employing various weapons. From swords to axes to bolas, the knights untiringly wield these impressive pieces with ease. The fights are very realistic, and I heard many gasps, sighs and cheers from the crowd around us! 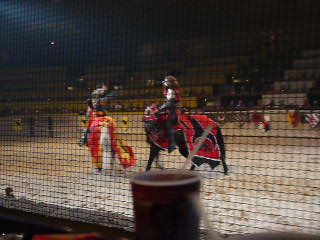 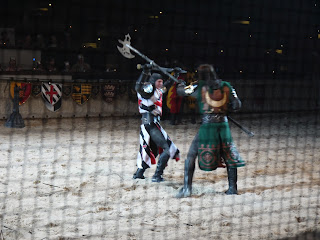 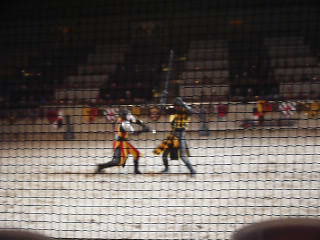 When at last a knight is declared the final victor (which just happened to be our knight, Lord del Font), the herald reappears ready to do battle. He challenges the victorious knight, which is of course accepted. This is a deadly fight-to-the-finish, and involves the messenger and 2 of his warriors, as well as our heroic knight and his Squire. As expected, the final champion is our Red-and-Yellow knight!! 3 cheers for our valiant knight!

At this point each knight rides back in and takes a couple laps around. The Lord Chancellor then rides to the center of the arena, wishes everyone a good evening, and closes the program with the most thrilling invitation to return to Medieval Times!

Now, I know this is an extremely lengthy review. But, I have to add a couple thoughts from the evening. First of all, this is not the only Medieval Times castle I have visited, but it is easily my favorite. The Lord Chancellor brought more enthusiasm to his role than another Chancellor at a previous show/castle I attended, and he also added in some impressive sword-wielding of his own :) Each of us also agreed that the show itself was more realistic, and the fights were improved-whether this was due to different knights, or maybe we just caught an especially good show, I don't know. Each scene, each act was performed with precision (by both horses and humans), and the whole show was a smooth, enthralling feature. Kudos also to George, the operations manager, who made our little group feel very welcome and excited about the show! It was certainly an evening we won't ever forget, and I look forward to visiting Medieval Times again in the (hopefully near) future!

One of my readers will receive 4 tickets to the
Medieval Times Castle in Schaumburg!