When we were in Branson a couple weeks ago, we had a few early mornings. Very early mornings. When you're rushing to head to this or that show, attraction or other destination, you don't always have time to sit down and eat breakfast at the hotel. But, we had an easy solution to the problem-Krispy Kreme Doughnuts! Conveniently located right on Branson's strip, and less than a 2-minute drive from our hotel (and many attractions as well) it was perfect for getting breakfast on the go! I received some coupons for free doughnuts, so each of us were able to go a few times and choose our own doughnuts. One of my favorites is the Cinnamon Apple Filled. 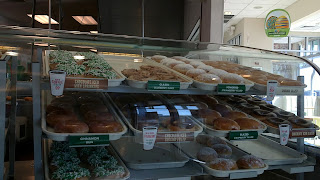 However, the first morning we stopped in, the Hot Light was on, which meant that the Original Glazed Doughnuts were being made. So of course, I had to get one of those! There is nothing like a hot, fresh, Krispy Kreme glazed doughnut! I mean literally seconds after it came off the production line, I was eating it!
Speaking of the production line, we all enjoyed seeing the donuts coming down the line, and sliding through the waterfall of glaze. 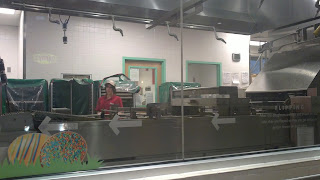 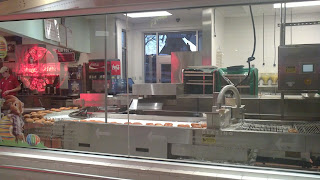 All of the doughnuts were, of course, delicious. I think each one of use has a personal favorite, and enjoyed being able to get a few while in Branson! C tried the Cinnamon Bun Doughnut for the first time, and said it was very good, and very rich. 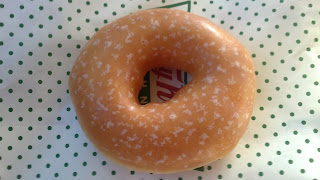 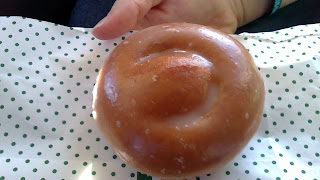 We also tried one of Krispy Kreme's Mocha Dream Chillers. This was the wonderful addition to our doughnuts! Coffee and chocolate are blended together in an icy drink that really is a dream! 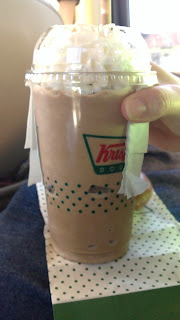 As we were in this Krispy Kreme several times over the course of a week, we were helped by several different employees. Each one was friendly and made sure our order was right and we were satisfied with our selections. One of the mornings we were in during the Hot Light, we were even given a "sample" of the Original Glazed Doughnuts-1 free doughnut each!

One of my readers will receive a coupon for 1 dozen
Original Glazed Doughnuts-FREE!!