I have to admit, this is not a topic I usually blog about. In fact, I don't even like shopping for bras in-store! It's just something I'm not open and carefree about, like some women I have met. However, when given the opportunity to review a bra from Leading Lady, I was excited; this is one of very few bra companies I have seen that has a very tasteful website. I also like the idea of shopping for bras online, rather than in a store! I received the Molded Padded Seamless Underwire Bra for review, and I am very impressed.


First of all, I was a little worried about sizing; I have never ordered a bra online before, for the simple reason that sizes seem to vary with each brand or even style! This bra, however, fits perfectly. Additionally, I am not a fan of underwire (that's an understatement-I actually hate underwire bras). However, with this bra, you can not even tell the wire is there, except for the extra support! There is no uncomfortable pinching, poking or rubbing, and no discomfort at all! This is the only underwire bra I have ever been able to wear comfortably! I also like the seamless aspect; many bra straps start rubbing during the day, but without seams, I had no problems. Overall this bra is probably the most comfortable (even with the wire) than any other bra I have worn. The cups have light padding, and the straps are nice and wide to prevent slipping and digging into skin. 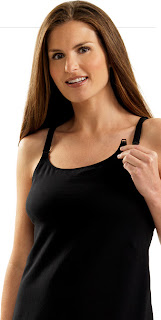 "Today, Leading Lady is one of the country's oldest and most successful intimate apparel manufacturers. We specialize in quality lingerie for mothers-to-be and new moms, as well as full-figure bras, sleep/leisure bras and other specialty lingerie and accessories.


It's been nearly three-quarters of a century, but Frank Farino's original vision is still alive and well here at Leading Lady. We remain a family company with Frank's descendants still at the helm. And we're still in the business of making and selling maternity and nursing bras, just like Frank was all those years ago."
Check out Leading Lady's selection of other nursing and full-figure bras! They're running some great sales right now, so don't waste any time!
Posted by Hope at 3:07 PM