A lot of my readers may have heard of Jonathan Park, but for those who haven't, let me introduce you to my little sister's favorite radio program.


"We hope that you enjoy your exciting journey into the world of Jonathan Park. Each adventure is based on real places and scientific discoveries — all designed to build your faith!

The adventures follow Jonathan Park, son of paleontologist, Dr. Kendall Park. While running from a storm, Jonathan and his father collide with the Brenan family as they seek shelter in a hidden cave. After discovering a massive dinosaur graveyard that shows evidence for a worldwide flood, these two families have combined forces to build a new museum, open the fossil discovery, and the hidden cave to spread the message of the Creator! Celebrate the victories as they lead others to live for God." 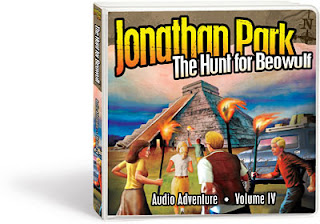 Our family has really enjoyed the Jonathan Park series, as they are entertaining and definitely very attention-holding...while at the same time they are teaching very important truths!  I received Vol. 4 of the series for review, which is entitled The Hunt For Beowulf. This set follows the Creation Response Team as they track a professional artifacts thief known as the Jaguar. Jaguar has stolen the original Beowulf manuscript from the British Library, and it is up to the CRT to get it back! Follow the team as they travel to many foreign places-including England, Iwo Jima, the Galapagos Islands, and the jungles of the Yucatan Peninsula!
I really love how this program teaches kids (and even the adults who listen in) about Creation, the Flood, and many other Biblical facts. In Hunt for Beowulf, the CRT learns about massive evidence for Noah's Flood in the United States, visit the Galapagos Islands and learn about the new species of Tortoise, and help promote the annual Scopes Festival and Trial Reenactment-all very important lessons and places in the Creation-evolution debate. Honestly, this is such a great method to really get your children grounded in the Word of God, encourage their faith, and stimulate them to think about all the evidence for Creation. 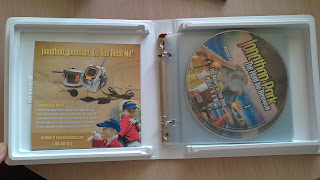 After receiving this set, I loaded it onto my little sister's iPod. She won't stop listening to it! Seriously, she will turn it on every chance she gets, and has probably heard it at least 10 times complete! I think I have an idea for her birthday gift later this year :) 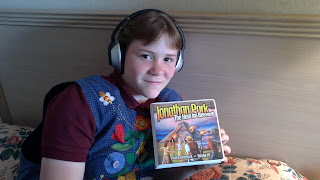 One of my readers will win Jonathan Park and The Hunt For Beowulf CD Set!!
Mandatory Entry-
Go to JonathanPark.com and tell me something you learned, or another set/adventure you would like to get!
Bonus Entries-

3 entries-Blog about this giveaway. Leave 3 comments with a link to your post.
1 entry-Become a Jonathan Park Junior Response Team Member! (This is free)
This giveaway ends Thursday, March 17, 2011, at 11:59 p.m. Please leave a valid email address in each comment, as this is how the winner will be notified. Winner will have 48 hours to respond, or another winner will be chosen. Giveaway open to US residents only.
Disclaimer:I was not monetarily compensated in any way for this post. All thoughts and opinions are mine. All quotes taken from the Jonathan Park website.
Posted by Hope at 7:04 AM