Okay, when I say "Sir Isaac Newton", I am sure you don't think of a historian. I usually think about Newton as a brilliant scientist and mathematician...not someone who wrote a history book! However, I recently read a reprint of his book, entitled Newton's Revised History of Ancient Kingdoms (edited by Larry and Marion Pierce). It's not really something I'd usually jump into reading, but I like to learn a little bit about everything I can, and this seemed like a good opportunity to brush up on ancient history. The first thing that caught my attention is the fact that that Newton admitted he only researched this as a way of taking a break from his more strenuous studies! If you read this book, you will understand just how shocking that is. There was obviously a lot of time, research and thought put into this book, and I am amazed that Isaac Newton considered it a fruit of his "idle hours".

"When you think of Sir Isaac Newton, you normally think of a great scientist and mathematician. His contributions to these areas of human knowledge are enormous. The same genius he applies to other disciplines, Newton also brings to bear on ancient history. Like a first rate defense attorney, Newton cross-examines the ancient writers, using their own words against them to expose their logical inconsistencies. He then develops a more sound chronology using scientific method based on logic, observations, astronomy, and just plain common sense.

Newton worked on this project for over forty years, but it was not published until 1728, a year after he died. Master Books is republishing this landmark book in a format and style suitable for today’s readers, and most of secular ancient history before 700 BC will need drastic revision in the light of Newton’s detailed findings." 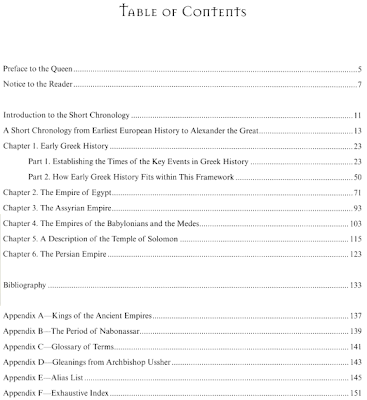 The book is just packed with information, and it is written in a way to keep your attention. Newton starts the book by refuting what other ancient historians had written or said. He uses their own writings to show the errors found in their books, in a very methodical, logical way. Then, the book turns to chronology, from early European history to Alexander the Great. I found this part very interesting, and I liked that the book includes important Biblical events as well. For example, Newton gives the dates for events such as the crowning of King Saul, King Solomon's marriage to the Egyptian king's daughter, etc.
The following 6 chapters cover Greek history, the Egyptian, Assyrian, Babylonian, Persian and Median empires, and a description of Solomon's Temple. Chapter 5, which covers the Temple, is my favorite part of the book. In addition to a clear, detailed description of the temple, there are also diagrams to aid in understanding how the temple was set up. This chapter really makes the Biblical description of the building of the temple come to life!
This is definitely a book I would recommend to anyone looking for a good chronology that supports a Biblical timeline. Very interesting and extremely well written!


Disclaimer:I was given a copy of this book for review from New Leaf Publishing Group. All thoughts and opinions are mine.
Posted by Hope at 4:45 PM