My Visit to the Chicago Toy & Game Fair (CHITAG)!!

This past weekend in Chicago, America's largest public toy and game fair took place on Navy Pier. This was my first time attending the Chicago Toy and Game Fair (also known as CHITAG), but it definitely will not be my last! We are planning on making this an annual event for our family!
I was not prepared for how huge this event would be, and I spent hours wandering through. Just when I was sure I had seen everything, it seemed like another booth would open, or I'd realize I had missed a corner! 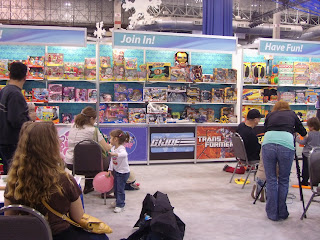 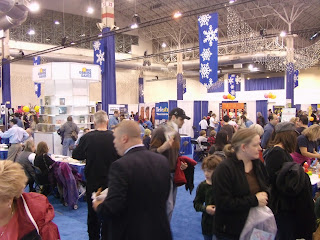 These pictures were taken pretty early in the morning; by the time I left, there was probably triple the amount of people! I really enjoyed myself, and came away with some new games (keep an eye out; I'll be posting reviews over the next few weeks...and some giveaways!)
My brother came with me, and we enjoyed learning how to play a game called SiegeStones.  Our family loves chess, and SiegeStones is a strategy game for 2-4 players. After playing, my brother couldn't stop talking about how fun it was! I completely agree with him...SiegeStones is a game I could really get addicted to!
Another new game we enjoyed learning is called Jacked Card Racing, and it is very unique! Basically it is a car racing game that is played with cards. The track, cars, everything are printed on cards! Very compact game you can take anywhere, and very fun! I had the privilege of actually meeting Holland Wood, the founder and owner. (This is one of the games I will be reviewing...watch for more information!)
The last game I'll mention here is called Wits and Wagers Family, and is an extremely fun game for families. Again, this is a game I'll be reviewing, so I don't want to give away too much here. Suffice it to say that this is the perfect party or family game!
Posted by Hope at 9:43 AM