A couple weeks ago I reviewed a game called "You've Been Sentenced" that our family all really enjoyed. McNeill Designs offered to send me their other game for review. This game is called Twisted Fish, and let me tell you, it is addictive! We sat down to play one round, sort of try it out and see how we liked it. Well, 2 hours and quite a few "rounds" later, we decided it was another family favorite! 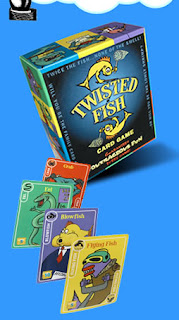 The game is basically like Go Fish, but with a...well...twist! I have to admit, I first thought this game would be more for the younger kids. However, the older children and adults really liked it too! The fun part of this game is trying to remember who has what cards! There are 13 fish, in 5 colors each, and the goal is to collect all the "full baskets" (a set of fish in each of the 5 colors) you can. But, this can be harder than it sounds! In our first game, E started out with a couple of the "card sharks", which are the highest scoring fish. But, C collected a couple, and they went back and forth taking each other's card sharks! And then...I picked up the missing yellow card shark...collected the rest from E and C, and ended up with the full basket of card sharks! To make the game play even more interested, there are "zinger" cards, which let you break the rules....legally of course! For example, usually you have to be specific about what card you ask for. "E, do you have the green hammerhead?" But if you have the "Net" zinger, you can just say "E, do you have a hammerhead?" So, having these zingers definitely adds more excitement to the game! (There's also a zinger that lets you keep the card an opponent asked for!)

"Founded in 2004, we at McNeill Designs have never considered ourselves an ordinary game development firm. In fact, we prefer to title ourselves a “Think Tank,” where creative ideas are allowed to run wild and innovation isn’t a request, but a requirement.

Now, they say that great minds think alike. However, at McNeill Designs we sometimes find just the opposite, due to the sheer number of revolutionary game, novelty, and product ideas generated by our 40+ team members.
In 2005 this creativity was put to the test when we brought our first product to market. As our flagship offering, the unique card game “You’ve Been Sentenced!™”now sets the tone for all future McNeill Designs’ endeavors. The result of thousands of man-hours in research, development, design and redesign, this game succeeds where others have failed, by making sentence forming an entertaining, challenging, fun, and easy-to-learn game.
So what will we think of next? As it turns out, we've thought of quite a lot. Several spin-off versions of “You’ve Been Sentenced! ™” are now underway with language translations versions, an educational color-coded version, and licensed specialty versions due to hit the market throughout 2006 - 2008. We have already launched our second game, “Twisted Fish” and are currently developing several other unique games and products for 2007. Stay tuned to the Future Games portion of this website for current updates."

I honestly think that McNeill Designs has some of the most hilarious games I've ever played! If you're shopping for a fun gift for your child, or just want a new game for the family, I recommend you try Twisted Fish!
Posted by Hope at 9:05 AM