I know most of you have probably heard of Tropical Traditions, and recently I was given the opportunity to review their popular Gold Label Virgin Coconut Oil.  I'm not a huge coconut fan, but as I have seen some very positive reviews on this, I decided to try it.  I used the Free Coconut Recipe page, and picked the Coconut Baking Powder Biscuit recipe. This is a very simple, easy recipe, that turns out some really nice biscuits.  I just made them as drop biscuits rather than rolling and cutting them out (we had friends over for dinner and it was already running late, thus the choice to make them into drop biscuits).  The biscuits had a unique flavor, and I liked that it wasn't an overpowering coconut taste.  They really turned out very nicely! Our friends, who have used other brand coconut oils, were impressed with the quality of the coconut oil. 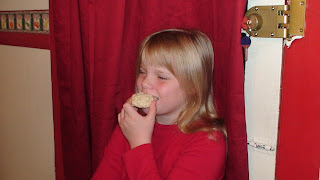 The only downside to using this coconut oil is the (to me) very strong, rather unpleasant smell. It's very easy to ignore, though, and after baking, the biscuits didn't have a strong coconut odor, so it's not  a huge deal.

I did find all the facts about coconut oil very interesting.  I had never heard how good coconut was for so many different issues! For instance, it is rich in Lauric Acid, which boosts the body's immune system. It has quite a few health benefits that I never realized.

"Virgin Coconut Oil is a food, and is one of the best cooking oils you can use. It has been a staple cooking oil for thousands of years in tropical climates. As a cooking oil, its chemical structure is kept in tact and therefore is resistant to mutations of fatty acid chains even when used in higher cooking temperatures, unlike most vegetable oils. Research shows that the medium chain fatty acids found in coconut oil boosts the body’s metabolism, raises body temperatures, and helps provide greater energy which can lead to weight loss. For hundreds of tasty recipes from people who use coconut oil, visit FreeCoconutRecipes.com."


So, if you already use coconut oil, or want to try some, now that you've discovered some of it's benefits, check out Tropical Traditions!
Posted by Hope at 10:14 PM